the history of massage in America

The history of Massage can be traced back to Greece, ancient Romans, and the Eastern modalities of shiatsu and tui na. The oldest and most common training in Western-styled massage that most therapists receive today is in Swedish-style, traced back to 1868 and Dr. Johann Georg Mezger, sometimes miscredited to Per Henrik Ling, a physical therapist, who instead created a gymnastics protocol which included manual techniques(1). Mezger first practices French "frictions" which would evolve into his methodology of Swedish massage: effleurage (long, gliding strokes), petrissage (kneading of the muscles), friction (firm, circular rubbing motions), tapotement (tapping or percussive movements) and vibration (shaking particular muscles).

Massage in America can be traced to the 1700's with "rubbers" who would uses rubbing and frictions to effect orthopedic ailments. "Medical rubbers were typically women hired by surgeons to assist with the rehabilitation of patients after surgery, and with treatment of lameness and joint diseases. Rubbers had little education, but possessed a knack for hands-on therapy. Their basic techniques were simple, but were modified to produce different effects. Rubbers incorporated joint movements into their treatments to increase range of motion, and to get lame patients walking again." (2)

Swedish-style made its way to America in 1890 in Boston, at the Posse Gymnasium, which paved the way for training of masseuse and masseur. in the Mezger and Ling traditions. "Agnes Bridget Forbes became the first licensed masseuse in North America in 1916." (2)

By the 1930's these practitioners were called physiotherapists, utilizing manual therapies, but also hydrotherapies, electrotherapy's, and movement therapies -more similar to today's physical therapy. In the 1943 an associated body came together to standardize and protect the masseuses and masseurs.

In 1958 the practitioners started to be called Massage Therapist, to disambiguate from the "massage parlors" which were associated with prostitution, and to help "give the field legitimacy as a health profession." (2)

As with most things, there was a boom of knowledge and transmission of modalities practiced around the world. "The human potential movement, epitomized by the Esalen Institute in California (est. 1962), fostered new types of manual therapy, such as Rolfing and Esalen massage. Hands-on approaches from Asia—including acupressure from China, shiatsu from Japan, and Ayurvedic massage from India—were embraced in America.

The term bodywork was coined to encompass the diversity of manual therapies that surfaced in this period. The wellness movement, fitness boom, concern about unhealthy stress, and growth of alternative medicine all contributed to a rising public interest in massage therapy, which expanded its scope to include diverse massage modalities." (2)

In the 1990's more regulation was set in place to protect both the practitioners and clients seeking care within this health field. Today, there are an innumerable amount of modalities of bodywork and many wonderful practitioners, helping us learn the ways our bodies can work, what are bodies can do for us, and how we can support them and how they support us.

Posted by stephanie lavon trotter, lmt at 11:38 AM 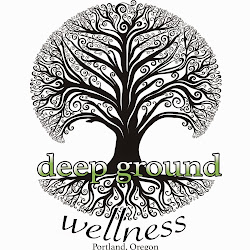